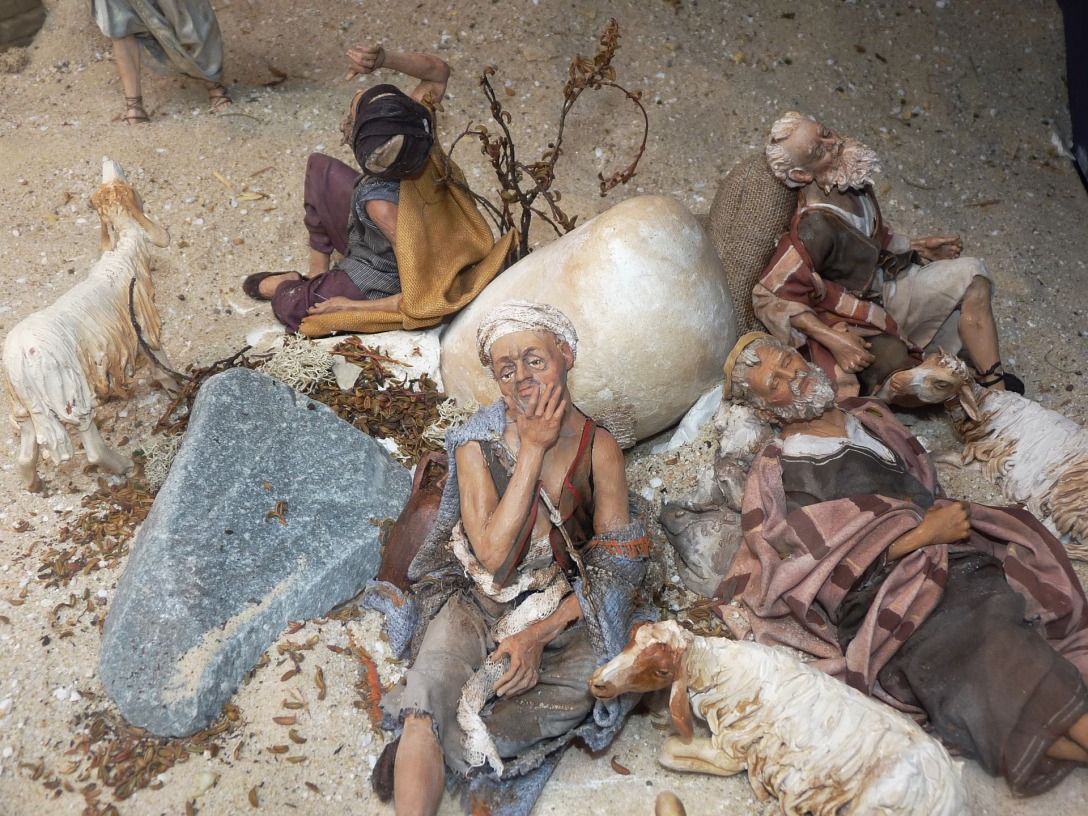 Although shepherding was considered an honorable profession in ancient Israel, that view had changed drastically by Christ’s time. Once nomads who herded their flocks from place to place, they soon forgot themselves as they settled into a comfortable life in Egypt. Egyptians were farmers; with shepherds came herds of sheep and goats that munched on their crops. They hated shepherds.

In Genesis 46, when Joseph reunites with his father Jacob and his brothers, he tells them:  When Pharaoh calls for you and asks you about your occupation, you must tell him, ‘We, your servants, have raised livestock all our lives, as our ancestors have always done.’ When you tell him this, he will let you live here in the region of Goshen, for the Egyptians despise shepherds.” To convince Pharaoh to allow his family to settle in the land of Goshen, Joseph had only to say – my father’s coming with all of his flocks – and Pharaoh was quite willing to relegate them to the boondocks. By Jesus’ time, shepherds were clinging to the very bottom rung of society.

“Dr. Joachim Jeremias says shepherds were ‘despised in everyday life.’ In general, they were considered second-class and untrustworthy….. rabbis banned pasturing sheep and goats in Israel, except on desert plains.

The Mishnah, Judaism’s written record of the oral law, also reflects this prejudice, referring to shepherds in belittling terms. One passage describes them as ‘incompetent’; another says no one should ever feel obligated to rescue a shepherd who has fallen into a pit. Jeremias documents the fact that shepherds were deprived of all civil rights. They could not fulfill judicial offices or be admitted in court as witnesses.

He wrote, ‘To buy wool, milk or a kid from a shepherd was forbidden on the assumption that it would be stolen property.’ In Jerusalem in the Time of Jesus, Jeremias notes: “The rabbis ask with amazement how, in view of the despicable nature of shepherds, one can explain why God was called ‘my shepherd’ in Psalm 23:1.”

And yet, when God sends an army of angels to split the heavens, filling the Bethlehem skies with other-worldly worship, he sends them to shepherds out in the middle of nowhere. Not to strutting kings or puffed up religious leaders or the pompous rich, but to men seen as thieves and liars, deprived of all civil rights, not even worthy of rescue.

Just imagine. It started out as a typical night. Perhaps, they were sitting around a fire to warm themselves – drinking, fighting, sharing bawdy stories – when suddenly all heaven opens up and the sky explodes with the light and voices of angels.

Imagine, you’ve lived your entire life despised by men. The world’s caste system is rigged and carved in stone. There is no ladder to climb, no bootstraps to grab to pull yourself up. Even if you could, you probably wouldn’t try because, the truth is, you despise yourself.

Then, in an instant, God chooses to announce His plan of outrageous redemptive world-changing love to you, of all people. From the highest heavens, he sends angels to you and invites you to be among the first to meet the Promised One, the Savior of the world.

Suddenly, you’re no longer on the outside looking in. God has opened the door
and invited you in and, just like that, you’re an insider.

The Bible tells us these men went straight to Bethlehem to see for themselves and then started to spread the word, telling everyone the good news. The least of the least became the first evangelists in the history of our faith, then returned to their sheep, glorifying and praising God.

I wonder how that night changed their lives? Did they cling to the memory of how God opened the heavens just for them, or did their daily struggle to survive cloud their vision until it stole their hope? Thirty years is a long time to wait to see a promise fulfilled. Were any of them still alive when Jesus began his public ministry? Did they get to hear him reveal his identity with the words,  I am the good shepherd – and did they know him?

We can only imagine.

The Spirit of the Lord is on me, because he has anointed me to preach good news to the poor. He has sent me to proclaim freedom for the prisoners and recovery of sight for the blind, to release the oppressed, to proclaim the year of the Lord’s favor. – Luke 4:18-19

Image by falco from Pixabay